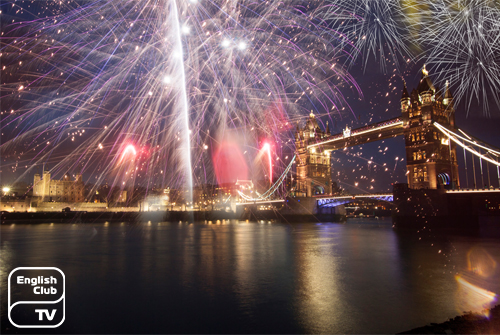 Here’s taking a brief look at some of the festivities and New Year celebrations UK.

Like everywhere in the world, it’s traditional to usher in the New Year with the traditional festivities. While, New Years Eve is not a public holiday, the celebrations start in the evening and go until the wee hours of the New Year. Many people often organize parties for the family or just join in the festivities at many hotels, with food, drinks and fireworks displays. Just before midnight the song ‘ Auld Lang Syne’ is sung while counting the minutes on the clock with shouting, whistling and blowing horns. The New year is celebrated with hugging and kissing and wishing everyone a prosperous New Year. Champagne is used to toast, followed by a lavish meal. 1st January is a Bank Holiday in London while many shops stay closed, and people spend the day with their families. People are often found to make resolutions for the New Year. A tradition observed in England called ‘first footing,’ is where the first person to visit in a New Year is supposed to bring luck for the whole year.

The New Year celebration in Wales is known as ‘Nos Galan’ in Welsh. The tradition is to let out the old and let in the New Year. If the first visitor for the New Year is a woman and a man opens the door, it’s considered bad luck. The Welsh people believe that it’s best to pay off any debts before the dawn of a New Year. On New Year’s Day, the children sing sounds and visit the neighbors and are given coins, mince pies, apples and sweets for singing, which goes on till afternoon.

The Scots celebrate the New Year in a grand way. The New Year celebration is called ‘Hogmanay’, which originates from an oat cake traditionally given to children on New Year’s Eve. These world-famous celebrations commence with a flurry of festivities that start from Prince’s Street, through to Royal Mile and Edinburgh Castle. The festivities begin on the 30 December with the ‘torchlight procession’; it’s similar to a river of fire. There is dancing, music, food and drink on the streets. However, tickets need to be purchased. Like the English, the Scots also observe the tradition of first footing.

Many celebrate the New Year with parties and festivities at home, streets or at the hotels. The dawning of the New Year greeted popularly with a countdown and fireworks displays. There are many traditions observed in Ireland such as the cleaning of homes and stocking up food being a sign of prosperity for the coming year, setting a place at the dinner table for those who have passed on and entering through the front door and exiting through the back door.