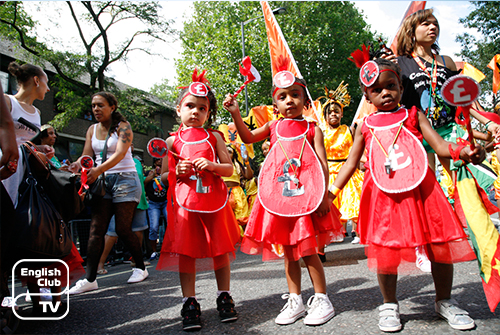 The African Caribbean people in the area first started holding the Notting Hill Carnival in 1964. Today it is considered the largest carnival in the world. The month of August each year sees thousands of people dressed in colourful costumes take part in the Notting Hill festival. The festival days are declared bank holidays for London W11 and this festive event takes everyone there in awe during the holidays.

Derived from the celebrations held by the Caribbean people in the 19th century, the Notting Hill Carnival takes place as a mark of celebration for their salvation from slavery. Initially, a group of musicians was used to perform at the Earls Court, London on every weekend. Eventually, they used to parade in the town which attracted black people to the street.

During the era of Slavery, black people were not allowed to hold such public festivals. But with the advent of their new freedom, they happily began to consume their full freedom. They dressed in costumes of their former masters and painted their faces in white. Some wore masks in numerous hues.

At present, an attractive parade of children participates in the carnival dances dressed in various colourful costumes. The show starts early morning between 9 a.m. and 10 a.m. The many steel bands produce enchanting rhythms from their varied instruments. There are also many World famous music events at the Powis Square Venue as well. The Association of British Calypsonians also holds their magnificent rhythmic music shows for the carnival.

Most of the roads in West London are usually closed to vehicular traffic on the carnival days. Therefore, visitors for the carnival must be aware of the itinerary of the carnival beforehand and reserve their lodgings appropriately. Taxies and private hiring services are in operation, but they are also heavily subjected to road closures. Some bicycle hiring agents too are not in operation in the peak hours of the carnival. The easiest way to reach the area is to travel by Tube and trains during the weekend.

During the carnival, visitors can satiate their taste buds by indulging in Caribbean gastronomic delights. Jerk Chicken, rum punch, rice and peas, and various other tasty foods will never let visitors go without tasting the traditional Caribbean dishes they cook.

Music is the main attraction in the Notting Hill Carnival. In the 2015 carnival, the famous steel bands such as Burrokeets UK, Cocovea, Bajan Revellers, Lagniappe, Flagz Mas, D Ridden Tribe, IsisMas Carnival, South Connections and Masquerade 200 will showcase their unlimited talents. Many Calypso, Soca, Steel Pan and music from Static Sounding system will envelope the area to the delight of the visitors.

However, the current security will be strengthened during the carnival. All steps will be taken by the authorities in the area to safeguard the visitors and the participants in this highly popular carnival in the world.