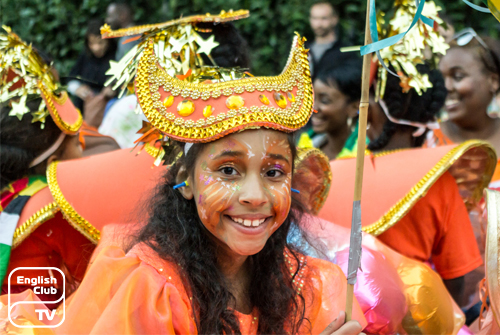 England is home to many of the world’s largest and most famous festivals. The first carnival in London held on 30 January 1959 at St Pancras Town Hall became a tradition for many communities in London and were said to attract at least a million people from all over the world.

In London, the Notting Hill Carnival is very popular. The carnival is held each year on the weekend of the August Bank holiday and is considered one of the largest street parties. There are individuals of all ages, sizes and cultures that attend this loud, colorful and vibrant affair. Each year, during the run-up to the carnival, there is an air of enthusiasm and anticipation, as individuals suit-up in colorful, creative, flamboyant and unique costumes and floats and prepare for this mega event. The atmosphere that presents itself during the weekend of the carnival is ‘awe’ inspiring for locals, visitors, and tourists, and talked about for weeks or even years after.

The Carnival kicks off with London’s top steel pan players, competing at the Panorama event. After that, the kid’s carnival is held, giving a prelude of the best. It made its way to ‘The Carnival’ featuring Soca, Calypso, Hip Hop and RnB, Reggae, Samba and Salsa, tunes blaring throughout the venue. Costumed Masquerades’ shaking their bodies in the most breathtaking and extravagantly decorated floats. The onlookers participate by waving flags, blowing whistles and dancing on the street with smiling faces. No one goes hungry in true carnival spirit, as the thick and delicious smells of BBQs fill the air and line the streets, selling juicy meats, corn and piles of sugar cane. The Carnival is not just to watch, but to join and have fun, with the best of London’s ‘ bobbies’ making sure that everyone is safe.

Other carnivals in London are also not to be missed, such as the Bridgewater Carnival in Somerset, one of the largest in the region and famous for its special illuminated effects.

It is believed the carnival dates back to pre-Christian times.   Many countries still celebrate the carnival tradition, and the most popular being in Rio de Janeiro, Brazil. Carnivals have evolved from the typical Sunday fairs and religious celebrations such as Saint’s Days, Parish Festivals, and Feasts, and other pagan festivities.

Today, carnivals in England are becoming more of a fundraising event as much, as it enlivens cultures, tradition and history to those who call England their home.