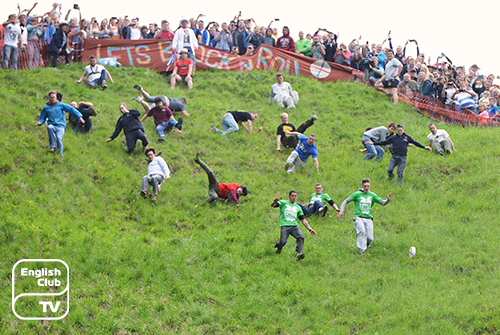 The Cheese Rolling Festival takes place at Cooper’s Hill, Gloucestershire in England. Traditionally, the villagers at Brockworth held the event and eventually, it has become a major event where thousands of tourists from all over the world take part. In 2013, proving its global nature, an American and a Japanese man won two races of the festival. Since it occurs on the summit of Cooper’s Hill, the festival is called “the Cooper’s Hill Cheese-Rolling and Wake Festival. Every Spring Bank Holiday the festival rolls anew.

Cheese rolling festival: for winning rights or a pagan custom?

Reportedly, the festival was a pagan custom. Those days, villagers rolled woods in flames from the hill to celebrate the dawn of a new year. The presiding person of the ceremony scattered sweets on the hill summit customarily at the beginning of this event. While a few participate in the events, thousands come to watch. After 15 people sustained injuries during the festival in 1993, the local council mediated and tried to enforced rules to safeguard the safety of viewers and the contestants.

The festival organisers had to build a fence around the field where the festival takes place. They also charge an entry fee from spectators. However, the events had no management. Even though chasing cheeses is not an official event, many locals believe that it is their obligation to hold the festival every year. The cheeses used for competitions weigh about 7 to 9lb. They resemble wheels with ribbons attached to them. People provide the fund to purchase the cheeses, sweets and decorations for the festival. Local cheese producers supply the cheeses. Diana Smart has been providing cheeses for the festival from 1988.

The organisers provide equal chances for both sexes to participate in cheese rolling races. But it is not an easy task to chase a rolling cheese and secure it at the finishing line, especially when three of four competitors are equal on the last lap. The cheese sometimes rolls towards the spectators and then bounces back to its tricky path. The rocky, muddy, treacherous path of the cheese challenges its competitors with hundreds of obstacles to win before one of them ventures into a risky leap to grab the cheese.

In the World War I and II, the real cheese rolls were not used for the competition. The competitors had to chase after a wooden cheese. But after the war when the food scarcity posed no issues, the organisers restarted the tradition of using real cheese rolls. Reportedly, the largest cheese weighing 40lb in the competition came from the New Zealand Dairy Products. Today the cheese rolling festival sees Double Gloucester Cheese in its competition.