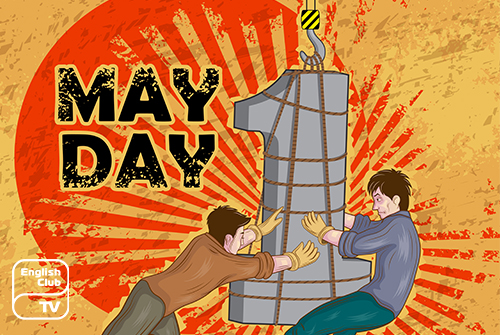 The first of May or the first Monday in May is traditionally a bank holiday in the United Kingdom. Although today it is associated with the International Workers’ Day, this was only since the 19th century, when May 1st was chosen by the socialists and communists, traditionally the May Day bank holiday is and always will be a Spring Holiday, celebrating the onset of spring.
The origins of the traditional May Day can be traced back to pre-Christian times, and the Festival of Flora, that honoured the Roman Goddess of flowers. The celebration has roots in many pagan, pre-Christian Germanic and Gaelic cultures as well. As Christianity started to spread over Europe, many pagan celebrations lost their religious fervour and May Day gradually evolved into the Secular Celebrations they are today. In the late 20th century, however, the advent of Neopaganism has brought about a resurgence in the celebration of May Day as a pagan religious festival.
Traditional May Day celebrations include the crowning of a May Queen, Dancing around the Maypole and Morris Dancing. The May Day bank holiday, while somewhat subdued in today’s culture, has always been a day of festivities and celebration. Most villages and towns associated May Day with the celebration of fertility in springtime, mainly that of the land, livestock and people. Much revelry accompanied these celebrations including fêtes and Maypole dances.
The spring bank holiday on the first Monday of May, as is practised today, was created in 1978. Before this, the May Day bank holiday was abolished by the Puritan parliament during the time of the interregnum. The holiday got reinstated after the Restoration of Charles II to the throne in 1660.
Amongst the celebrations of May Day many have been passed down from generation to generation as a matter of tradition. Maypole dancing is one such tradition that has come to exemplify the holiday. Children, girls in particular dance holding on to ribbons suspended from a maypole. Another famous form of dance during the May Day holiday is Morris dancing, which is a dance performed exclusively by men, accompanied by rather loud music on accordions. Other favoured traditions during the May Day bank holiday include the crowning of a May Queen, a tradition harking back to Roman times where the May Queen is said to represent the living embodiment of the Roman Goddess Flora.
Apart from pagan and secular celebration, May 1st is also a day synonymous with long, massive marches, particularly in commercial hubs such as London, in celebration of worker’s rights. More often than not organised by unions, some are politically driven and have ended negatively on a violent note, contradictory to the holiday’s intended purpose. Today’s May Day celebrations have cemented as a bank holiday, wherein Banks, private organisations, businesses and schools are closed.
All in all, the May Day bank holiday, although having its roots steeped in pagan mythos, has adapted since its inception and has grown to accommodate and encompass all cultures and religions and has come to represent a broader celebration with a considerably different purpose behind it.