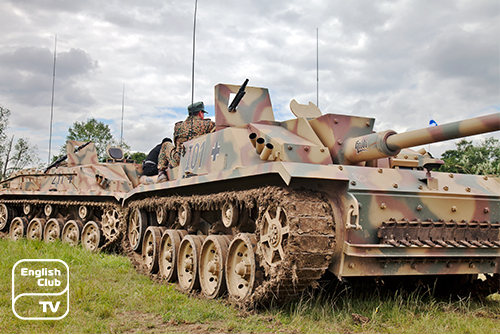 When World War I (WWI) ended, every leading country had realised the importance of having fortified high-calibre tanks. The UK was in the forefront among them. As the background for WWII was setting, the United Kingdom had already tested a few highly sophisticated armoured infantry UK tanks. By 1934, they designed the Infantry Tank equipped with a machine gun. However, the speed of this tank was similar to that of a man walking. Since the Infantry Tank specifically designed for land battles with infantry units, setting their high-speed was not taken into account.

First of the range of infantry tanks, alighted were Matilda I and Matilda II tanks. The former included a machine gun and the latter an additional QF 3 pounder anti-tank gun. Matilda II produced in 1937 was a heavily armoured tank when compared to its predecessor, Matilda I, therefore, it saw the production of about 2,987 Matilda II tanks during the period between 1937 and 1943. The model at the time, was known as the ‘Queen of the Desert’.

The UK tanks in the Battle of France

The UK produced Matilda MK 1 (A11) tanks along with Matilda II (A12) tanks and took part in the Brigade of Army Tanks in the Battle of France. They successfully faced the Nazi invasion in Germany in 1940. The Panzer II and Panzer 38(T) tanks which Germany introduced at the same era could not penetrate the UK range of Matilda tanks. Supported by lighter armed vehicles, the Matilda Tanks overtook the heavy retaliation of the Nazi forces in France.

UK tanks and the Cruiser MK I

However, in North Africa, even though Matilda could overcome the attacks by Italian tanks, they were not able to fight against the German anti-tank guns. But, until the latter part of 1942, Matilda tanks were in service battling amidst the El Alamein Battle II in North Africa. The British then introduced Cruiser MK I which proved as capable of overpowering the Nazi, fighting in France, North Africa, and Greece.

However, a request made to Leyland Motors Limited to produce a modern tank, which resulted in the manufacturing of the Comet Tank equipped with a new gun ‘77MM HV’. These types of guns easily fixed to the tanks named A34 Comet. From then to the end of the WWII, about 1,200 Comet tanks were produced by the British. After that, the Valentine Tank and the Churchill Tank, both infantry tanks, were produced. About 8,274 Churchill tanks were said to have been built by 1944. However, many defects found with the early Churchill Tanks were fixed later.

UK tanks – the Vauxhall A22 and Centurion

Another versatile tank model that the UK produced was the Vauxhall A22. A heavy load of weight was borne by this tank while moving. Therefore, this tank’s range became notably considered as a highly stable replacement for the earlier less-sturdy tanks. By the end of WWII, the UK succeeded in producing a universal tank design called the ‘Centurion’. This range boasts more powerful engines and high-calibre guns.

Many of the uk tanks came equipped with vehicles imported from the USA, like Lee and Stuart. These tanks took part in Operation Crusader, 1st Armoured Division and also in Armoured Brigade. Among the range of tanks that the UK produced, Churchill AVRE equipped with 290 mm mortar gun holds a particular rank since they were used to overcome barriers like sturdy structures.