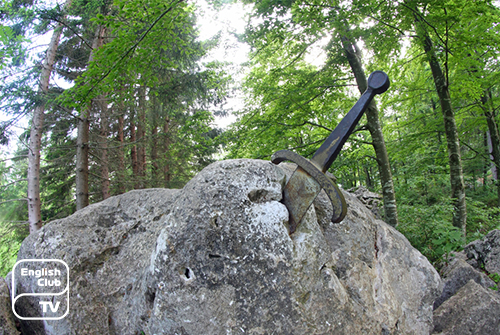 The legend of King Arthur includes variously described accounts which historians believe people may have known for centuries. A book written by Geoffrey of Monmouth in 1136 tells that a king called Uther had ruled Britain in the past and had no male child to bestow his kingdom. However, he was involved in an affair with ‘Ygraine’- the wife of the Duke of Tintagel.

This relationship resulted in a full-fledged war between armies of the duke and the king which the King won with the support of the Wizard Merlin and with the Duke killed in the battle, King Uther added Tintagel to his kingdom and married Ygraine. Eventually, the couple was blessed with a boy child. Merlin. Robert de Boron, a poet in the 12 century, added to this legend that Merlin took the infant to one Sir Ector, and he and his wife became the foster parent of the kid. But they were not aware of the actual identity of the infant and treated him as a bastard. Sir Ector’s son Sir Kay too hated this baby, and Arthur grew up in humiliation without knowing his origin.

After awhile of this event, King Uther fell ill and died. The country entered into chaos without a proper king. Then the nobility of the country sought the support of Merlin in finding a real king for the country. After that, on an anvil atop a large stone in the Westminster churchyard, Merlin set a sword and displayed beneath that anyone who can take the sword from its sheath will be the king of England.

None was able to pull the Sword from the anvil and eventually everyone forgot the challenge. When the boy who was at Ector grew up, Merlin trained him with many skills and above all to use his brain rather than his strength in anything in life.

At 15years of age, this youngster came with Merlin to where the sword was set and succeeded in pulling it out. Amidst the assembled thousands of people, he was declared the king of England. Arthur announced that his kingdom is called Camelot, and its symbol should be the dragon. However, like his father, Arthur had been lonely.

One day a beautiful woman entered the palace and requested abode somewhere in the palace for the night and ended up spending the night with the king in his room, but when the King woke up in the morning, he found that she had gone without a trace.

After this event had taken place, a gang of invaders entered the palace, and the King fought against them. He, as expected, succeeded in surmounting the coup, but his sword broke during the battle. That night, he decided to stay in another palace for the evening although Merlin opposed to it. In the night, hearing the playing of a harp, he traced the sound and met a beauty called Guinevere in a room.

Despite Merlin warnings, that this woman could bring destruction to the kingdom, Arthur married Guinevere and that night with Merlin’s escort, the king received a magical sword from Nimue, the Lady of the lake. She said that as long as the sword remained with the king, no one could harm him.

After many years of happiness in the marriage of Arthur and Guinevere, Arthur happened to meet his son, and Merlin told the King that a son was born to him. And the woman that he spent a night with in his room that fateful day of the past was his mother, who was also Arthur’s half-sister Morgan le Fay. Merlin also said that the king should not have them taken into the Palace. So unfolds the legend of Arthur which tells us many brave and astonishing stories of King Arthur, his defeat, his love affairs and his fate that ultimately led his kingdom, Camelot to destruction with him.