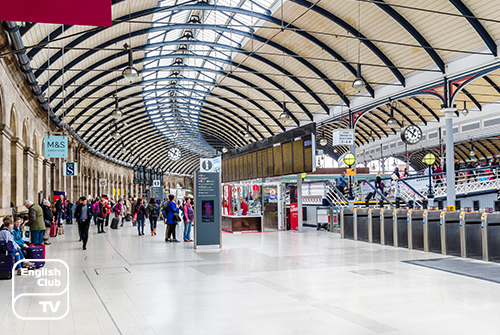 The Newcastle railway station is part of the East Coast Main Line in the UK. Newcastle upon Tyne or Newcastle benefits mainly from this rail line. Code named NCL, the railway line came to exist in 1850. The station in the city centre falls within the Grade 1 listed UK building category.

Since main railway lines London-Edinburgh, the coastline of Durham-Middlesbrough and the Tyne Valley-Carlisle connect the Newcastle railway station, its importance to the transportation of the UK is immense. Today, the Virgin Trains East Coast manages the station.

In 1836, Thomas Sopwith and Richard Grainger proposed a central rail line for the city. But it did not materialise. However, in March 1847, passenger trains began running from the Forth Station through the city. The king of railways, Hudson, meanwhile received parliament approval in 1845 for his Newcastle and Berwick railway lines.

Hudson recruited architect John Dobson to design a railway station for Newcastle in February 1846. Dobson along with engineers Robert Stephenson and T.E. Harrison completed the design, but Hudson did not realise his dream until August 1850.

Queen Victoria declared open the station on August 29, 1850, by arriving at the station on a train. The Station experienced rapid development in the years to follow. In 1871, it received a new platform, and the year 1882 witnessed the station receiving city status. Today the station boasts 15 platforms of 3,000 yards.

All the trains that the Virgin Trains East Coast operate between London and Edinburgh stop at Newcastle. Also, train services from Cross Country that go to Scotland operate to South, South West, and the coast line trains that comes from Birmingham as well as trains that originate from the Midlands region stop at the Newcastle station. The Trans Pennine Express too stops at Newcastle and run to Manchester Piccadilly.

The Newcastle station combines north and west thereby providing excellent train services to Metro Centre Shopping Centre, Carlisle, and Hexham. It also provides trains services to Whitehaven, Cramlington and Morpeth as well as to Chathill on the main line. Hartlepool, Middlesbrough, and Stockton are the main stations where trains from Newcastle stop at on their way to the deep. Other train services such as the Glasgow Central and the Abellio Scot Rail also share the Newcastle line.

In 1981, authorities built an underground station exclusively for the Tyne and Wear Metro trains. Today above five million commuters use the underground station per year thus making it one of the busiest railway stations in the UK. Last year, the ORR approved a proposal to join in the East Coast Trains to run trains from Edinburgh Waverley. The trains under the agreement would run via Stevenage, Newcastle and Morpeth by 2021.

The Newcastle station witnessed very few accidents. Two electric multiple units collided on August 17, 1951, killing two people. Two trains collided on April 19, 1955, on the diamond crossing and both trains derailed in the collision. Besides that, the station experienced no major accidents to date.