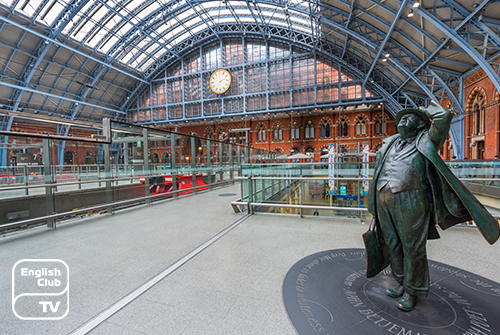 St Pancras railway station located in ‘London Borough of Camden’, on ‘Euston Street’, is a British train station named after the patron Saint of children, ‘St Pancras’. Also known as ‘London St Pancras’ and in later years as ‘St Pancras International’, this railway station spans in all directions as an underground rail network. It has acquired global fame as one of the greatest marvels of Victorian architecture in the UK.

In 1863 the ‘Metropolitan Underground Railway’ opened between ‘King’s Cross’ and ‘Edgware Road’. It is the first of the world’s underground railways, and it’s ‘Barlow Train Shed’ was at that time, the biggest in the world.

The principal engineer for this project was ‘William Henry Barlow’. At 4.20 am, on the 1st of October, 1968 the night mail from ‘Leeds’ arrived at the station, being the first train to enter the completed St Pancras Railway Station.

In 1921 a war memorial was erected at the station in memory of the employees at ‘Midland Railway’ who lost their lives during the ‘Great War’. During the 1939 war, all St Pancras railways came under government authority to transport weapons and troops. The station was bombed in 1942 destroying the 3rd and 4th platforms.

A proposition is brought to combine ‘Kings Cross Station’ and St Pancras Railway Station but denied permission. In 1967, however, the station was listed as a Grade I heritage building of Great Britain, and from 2001-2007 St Pancras undergoes a renovation project at a budget of 800 million pounds, to accommodate international train services. ‘Queen Elizabeth II’ graced the opening ceremony, granting the station worldwide publicity by opening the new addition of the ‘Channel Tunnel’, a ‘high-speed rail link’ to St Pancras Railway Station for trains from ‘Dover’ to ‘London’.

Designed by the world famous sculptor and artist ‘Paul Day’, ‘The Meeting Place’ is a bronze statue standing at 9ft, and aptly capturing the essence of a station in an optimistic light, as a ‘place of reunion’ as opposed to its general idea of separation.

In celebration of ‘Sir John Betjeman’ and his poetry, an 8.5ft statue of his form was erected at the station. Designed by ‘Martin Jennings’, the sculpture recognises his prevention of the 1960 demolition of St Pancras Railway Station.

Sir Elton John performed at the station in 2016 and left behind his signed ‘Yamaha piano’, stating that it’s a gift to be enjoyed by the visitors to St Pancras.

Around 25 restaurants and boutiques are available at the station from Starbucks outlets to sushi places. Drinking choices may range from an average espresso to a taste of champagne at ‘ Searcy’s Champagne Bar’. St. Pancras is also a convenient stop for shopping with a wide variety of retailers located on station grounds. The ‘St Pancras Renaissance Hotel’, is the best place to stay, famed as the most romantic building in London for its Gothic architecture and style.