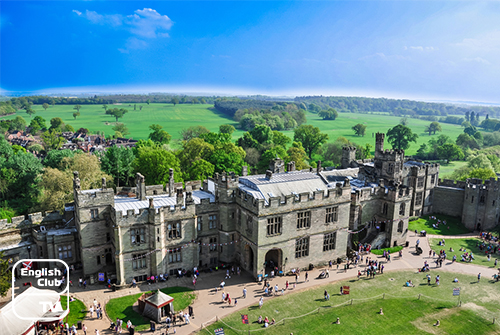 The Impressive Warwick Castle history attracts millions of tourists to England each year. Dating back to the 11th century, the castle has since been undergoing many attacks, renovations, and additions. History says that William the Conqueror built the Warwick Castle in 1068 in Warwickshire. Originally, it was a wooden construction close to the River Avon. However, the 100 years’ war provided enough reasons for its owners to rebuild it in stone in the 12th century.

Before William built the castle to suit his whims, in 914, Æthelflæd, the eldest daughter of Alfred the Great, took steps to build a small fort to face the Danish invaders at the present site of the Castle. The castle came into the limelight again when William the Conqueror rebuilt it in 1068 with timber and appointed one of his followers, Henry de Beaumont (Earl of Warwick), in 1088 to look after the former’s interest.

In 1242, Margaret, the sister of the last earl of Warwick, owned the castle and later her Husband – John Du Plessis. In 1263, William Mauduit, a cousin of Margaret became the owner of the castle because Margaret and John Du Plessis had no children. Later Maudit became an ardent supporter of the king in his Barons War.

In 1264, Simon de Montfort the Earl of Leicester, who led the Barons in the revolt, invaded Warwick and imprisoned Mauduit and his wife, Margaret. In 1268, William de Beauchamp owned the castle after his uncle, Mauduit. Under his control and his descendants’, the status of the castle improved a deal as its owners had amassed a massive wealth over a period of 148 years. In 1312 politics of the kingdom being very tense led to the capture of Piers Gaveston and his deportation to the Warwick Castle and executed later for treason.

During 1350, the castle received a Dungeon and the Caesar’s Tower. In 1395, the Guy’s Tower, which is about 39m in height, was built. Another important historical event took place in 1397 when King Richard II exiled Thomas de Beauchamp, the then owner of the castle, for treachery. However, he regained his inheritance with the crowning of Henry IV in 1399. In 1431, the trial of Joan of Arc took place in 1431 under the supervision of Richard de Beauchamp where the Earl of Warwick became charged with heresy. She was burned to death at the marketplace in Rouen in Northern France at the same time.

In 1445, Henry de Beauchamp became the Duke of Warwick with the blessing of King Henry VI, which grew under the loving care of the former. However, the Warwick Castle history does not show any other Duke at the castle after Henry de Beauchamp but an earl (1449) who was his sister. She married Richard Neville, who defeated Henry VI and Edward IV during the Wars of the Roses. He was, therefore, known as the Kingmaker. In 1450, the castle received two additional structures called the Gatehouse and Barbican.

Richard Neville aka King Maker was defeated in 1471 at the Barnet Battle. George, the Duke of Clarence, the king maker’s brother, inherited the Warwick Castle from him. But he was suspected of conspiring against King Edward and later was executed after a brief incarceration. His son then became the Earl of Warwick from 1478 to 99, but he was treated as an enemy of Henry VII and confined to the Tower of London.

In 1499, Edward too was executed for treason, In 1540, the castle saw new additions with the construction of its Spy Tower, Staterooms and the reinforcing of its south front as well. Queen Elizabeth I, made a visit to the castle in 1572. In 1604, King James I gifted the castle to Sir Fulke Greville and in 1628, a servant killed him and from then onward, it is said the ghost of Sir Fulke wanders about the castle. In 1695, King William II visited the castle and in 1853, Queen Victoria had her lunch at the Castle. A fire swept the castle’s private apartment in 1871 and extinguished when it spread to the Great Hall.

In 1938, Charles Guy, the 7th Greville Earl became a Hollywood Actor by taking the stage name Michael Brooke and received fame starring in Dawn Patrol (1938), a favourite film of the time. In 1978, Tussaud’s Group purchased the castle, placing wax images at the castle for the first time. They introduced the Royal Weekend Party at the castle to the elite.

In 1996, the Queen and Prince Phillip visited the castle, and the Queen unveiled a sword. In 2000, the ‘Death or Glory’ was opened. An armoury and the castle became a royal venue for Christmas festivities and Justin Nights. In 2004, the apparition of murdered Sir Fulke Greville was created by a live-action creation with actors. In 2005, the largest trebuchet in the world was brought into the castle (18M high, 22 tonnes weight). In 2009, the dungeon of the castle was open to the public thus revealing the horrific history of the castle. In 2011, the Dragon Tower ‘Merlin’ was opened and in 2013, the legendary rooms of the palace were opened.