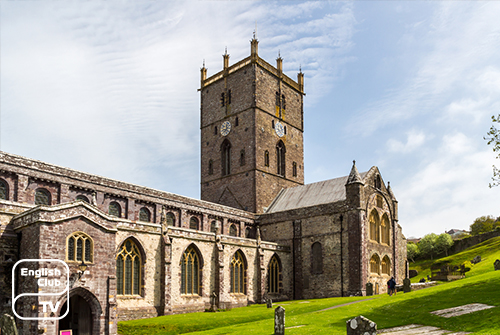 The patron Saint of Wales, locally known as ‘St. Dewi’ and referred to in English as ‘St. David’, established a monastery at ‘Pembrokeshire’ in Wales. Founded during the late 6th century, St. David served here, until his death in 601AD, as the ‘Abbot of Menevia’. The monastery’s primary task was to train missionaries to spread Christianity in Ireland.

Numerous times in the years following its establishment, the monastery was raided and destroyed by passing invaders and marauders, such as the Vikings. In the 9th century, however, the monastery was recognised for its spiritual and religious significance by ‘King Alfred’. He sought assistance from the community at St Davids Cathedral, in hopes of providing intellectual influence to the citizens of the ‘Kingdom of Wessex’. The raiding continued, and eventually, ‘Bishop Morgenau’, and after him, ‘Bishop Abraham’ were killed by the Vikings. The stone set at Bishop Abraham’s grave, one carved with many Celtic symbols, is displayed at the ‘Cathedral Exhibition’ under the title, ‘Abraham Stone’.

In 1081AD ‘William the Conqueror’ paid a visit to the monastery to pray, thereby highlighting its sanctity. Again in 1089AD, this holy place was subjected to vandalism, and thieves stole its precious metals.

Things took a brighter turn for the monastic community during the reign of ‘King Henry I of England’. Though the Normans governed Wales during this period, the English monarch managed to appoint ‘Bishop Bernard’ to the title of ‘Bishop of St. David’. Bishop Bernard begins construction of the new St Davids Cathedral following his appointment. In 1123, the Bishop managed to secure a papal privilege by ‘Pope Calixtus II’. He announced to the Christian community that “Two pilgrimages to St David’s would be equivalent to one to Rome, and if three pilgrimages were made, it would be similar to one to Jerusalem”. This statement marked St. David’s as a key place of worship in the Western world, thereby elevating its spiritual significance.

The Cathedral of St. David, as we see it today, began its construction after a visit for prayer by ‘King Henry III’. The influence of the monarchy and the increased number of pilgrims demanded a larger house of worship, which is why the present day Cathedral was built in all its magnificence. In the first few years, the Cathedral faced some damage with the collapse of the new tower and the 1247-48 earthquakes, but in the following centuries, the Cathedral continued to improve under the control of many Bishops. Some notable additions are the ‘Holy Trinity chapel’ and the ‘Bishop’s Palace’, with the latter which now lies in ruins. In 1540 the high altar became the resting place for Edmund Tudor’s tomb.

Bishop Barlow’s confiscation of the Cathedral jewels and relics, along with Oliver Cromwell’s policy, significantly affected St Davids Cathedral and it required restoration many times. ‘John Nash’, a famous Welsh architect performed the initial stages of the rehabilitation. In 1989 Queen Elizabeth II distributed ‘ Royal Maundy’ at St. David’s and in 1995 she reinstated the Cathedral’s ‘city’ status.