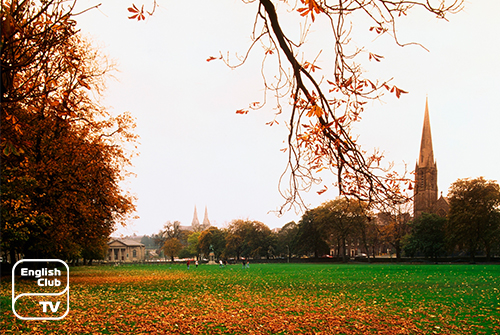 Armagh city is a civil parish and the ecclesiastical capital of Ireland for over 1500 years. It is the seat of both the Catholic Church and the Church of Ireland. As mentioned in Irish mythology, until the dawn of the 1st century, Armagh was the capital of ‘Ulster’. The lands were blessed with Goddess Macha’s name and called ‘Ard Macha’, meaning ‘Macha’s height’. It eventually evolved to the present day ‘Armagh’.

St Patrick’s is an Anglican Cathedral, built upon the hill ‘Ard Macha’. The hilltop areas were first constructed on in 445AD by St. Patrick. It was called the ‘Great Stone Church’ and a Christian church existed on the hill ever since. The present day Cathedral, though renovated many times, still retains the structure designed in the 12 century by ‘Archbishop O’Scanlon’. Its high cross was carved in the 11th century and is among the many monuments found on the grounds.

Devout pilgrims are said to make one to two visits to the cathedral annually as it is a famous spiritual getaway in Ireland.

The sister of the ‘Church of Ireland’ cathedral and a most curious and spectacular site, St Patrick’s Catholic Church stands upon a hill adorned with twin spires. The Cathedral’s architectural structure is most stunning, with its lower half belonging to the English ‘Perpendicular Gothic Style’. The style of the walls, however, changes to the French ‘Decorated Gothic Style’, as they progress upwards.

The gardens at this cathedral are also open to the public. It is a herb garden which follows planting patterns used in early Christian monasteries. This cathedral, along with the ‘Church of Ireland’ is included in the St Patrick’s Signature Trail by the Northern Ireland Tourist Board.

Complete with a ‘Digital Theatre’, the Armagh City Planetarium offers a truly extraterrestrial experience. Its tours across the galaxy followed by myths and tales of origin behind star constellations are unique to Armagh.

The planetarium is home to the largest meteorite in Ireland which is 4.6 billion years old. Visitors can view and touch it at the exhibition area which also offers interactive displays. Curriculum based tours are available to students of all ages starting from kindergarten.

The Navan Centre and Fort

The Navan Centre in Armagh city built around the ‘Navan Fort’, is a site of extraordinary archaeological significance. Referred to as ‘Emain Macha’ in old Irish, the site is believed to be the royal grounds of ‘pre-Christian Gaelic Ireland’. Irish mythology names the place, the capital of the ‘Ulaidh’. Archaeologists, however, assumed that the ‘Navan Fort’ was used for pagan ceremonial purposes.

The Navan Centre is open to those who wish to experience Ireland’s history through a series of interactive exhibits and activities.

Ideal for space-lovers worldwide, the Armagh Observatory is the oldest in Ireland. The ‘Armagh Human Orrery’ is found here and is the first of its kind in the world.