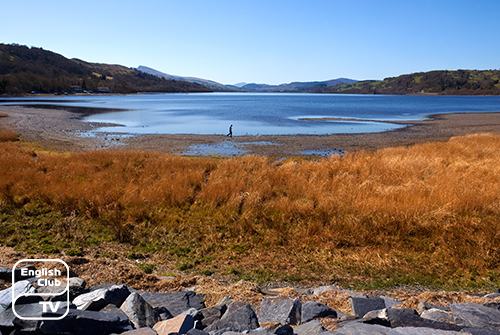 Hidden in the midst of mountain valleys in ‘Gwynedd’ is the largest natural water body in Wales. It is popularly known as the ‘Bala Lake’, and locally it is named ‘Llyn Tegid’ meaning ‘The Lake of Serenity’. The massive and magnificent Bala Lake stretches over an extent of four miles with a depth of one hundred and fifty feet. Since it is located in a glacial valley, the lake is of glacial origin. It is also fed by the waters of ‘River Dee’ and is thus famously known for its clear, deep waters.

Many species of wildlife and water plants abounds the lake and the vicinity of its surroundings. The Bala Lake’s legacy is the ‘Gwyniad’ that lives and breeds only in this water body in the entire world, due to the lake’s glacial origins. These fishes are survivors of the last ‘Ice Age.’ These are rare fish listed as critically endangered species on the IUCN’s list of endangered fish species. Their numbers are fast dwindling with the last registered count being at 10, 000 only. Other shoals of fish populating these waters are the Pike, Eel, Roach, Brown Trout and Perch. Another notably rare breed spotted in and around the lake is the mollusc, ‘Myxas glutinosa’, or simply, the ‘Glutinous Snail’. Among plant life, ‘Water Plantain’ is a rare species of plant found in the area. There are over 120 varieties of birds that are sighted occupying the skies over the Lake. Bala Lake is naturally a must-visit location for marine biologists, fishermen and bird lovers.

What’s a Lake without a legend? Bala Lake has its story to tell. These waters are rumoured to be home to a peculiar kind of aquatic creature, described as a lake monster known as ‘Teggie’. Teggie, supposedly sighted by a local living in the city of Bala located at the lake’s North-Eastern edge, about a century ago. Natives speculate that it could have been a giant sized Pike or another survivor of the Ice Age.

Another legend based around the lake is that of the ‘Bald Tegid’ or ‘Tegid Foel’, husband to the legendary witch or goddess ‘Ceridwen’. Tegid’s court, folk tales relate, is now lying at the bottom of Lake Bala, along with the village in which it was situated. It is also believed, that on the night of the full moon, lights from the town and the court shine upon the surface of the lake.

Apart from its supernatural allure, there are lots of other attractions available to tourists at Lake Bala. For those who like water sports, Bala Lake is the place to be. Be it sailing, rowing, canoeing, kayaking or windsurfing, the equipment hiring sites, along with the great winds of the lake are bound to make it a once in a lifetime experience.

For the more relaxed and meditative others, the shoreline brimmed with various areas for resting or enjoying a picnic and encircled by the serene beauty of Lake Bala and its surrounding icy valley remains unmatched. It’s an ideal location for a morning stroll or a peaceful yoga session, and visitors could always check in at Bala city for an evening drink or a taste of local cuisine.