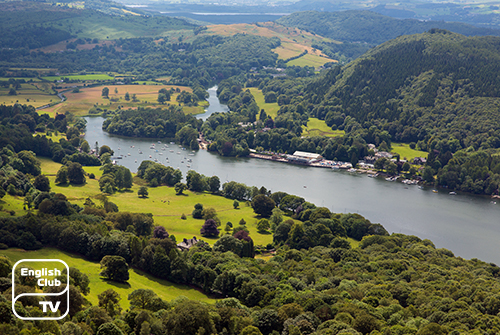 The largest of all natural lakes in the United Kingdom, Windermere Lake in Cumbria is a tribute from the last great Ice Age. Created well over 13,000 years, the Windermere Lake had its birth from two glaciers; the ‘Fairfield Horseshoe’ and the ‘Troutbeck Valley’ glaciers. The water content is mainly ‘meltwater’ – water formed from the melting of the glaciers and its two basins at the North and South contains volcanic rocks and soft shales.

The exact length of the lake is debatable. Some suggest that the lake’s length between ‘Lakeside’ and ‘Newby Bridge’, south of the lake, must be included in the calculation. It puts Windermere Lake at around 11 miles in length. Excluding that area, the lake is about 10.5 miles long. Windermere Lake boasts a depth of 66.7 meters, with the lake bed lying quite a distance below sea level, while the estimated area the lake covers are 5.69 square miles.

Windermere Lake fed by several rivers, namely, Rothay, Trout Beck, Brathay, and Cunsey Beck with several small streams among them, is drained at the lake’s southernmost area which leads to the ‘Leven River’. The Roman fort ‘Galava’, used even today to transport heavy materials over water, stands at the ‘Waterhead’, at the northern end of Windermere Lake.

The lake has 18 islands spread over it. The largest of them all, known as ‘Belle Isle’ is a private island. About 800 years ago, the island went by the name ‘ Lang Holme’ and housed the ‘Manor of Windermere’. The other smaller islands also called by names containing the ending ‘Holme’, which means ‘island’ in the native tongue. The smallest called ‘Maiden Holme’, consists of a single tree.

The village of Windermere lies about 20 minutes from the lakeshore. It was created in 1847 after the building of a railway, providing transport first by train and later by bus as well. The farm nearest to the station, called ‘Birthwaite’, grew around the railway and the village and station adopted its name. The locals later began to use the name of the Windermere Lake giving the village and the railway its current titles. ‘Bowness-on-Windermere’ is the only settlement found on the lakeshore and that too is a famous tourist town and holiday resort.

The Windermere Lake is a must visit for water sports enthusiasts. Around 10,000 boats are available in great variety (speedboats, powerboats, yachts, etc.) at ‘Bowness-on-Windermere’. Till the year 2005, the speed limits within the lake area remained unchanged. In 1930, Sir Segrave landed a record for the fastest speed on water while boating on the Windermere Lake. His average speed was at 158.94kmh but the boat overturned and Sir Segrave’s mechanic drowned, and Sir Segrave himself passed away due to injuries. He remains among some of the very few to have held world records for both land and water speed simultaneously. Other activities include swimming; walking along trails, bird watching, fishing and simply enjoying the serene bliss of a lakeside holiday.