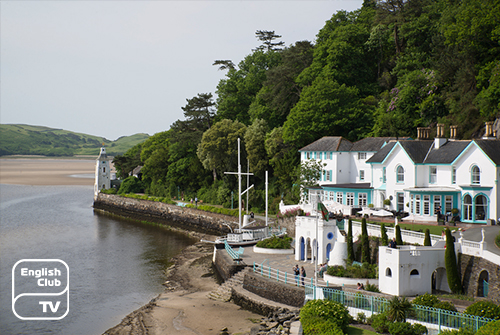 The late Sir Clough William-Ellis had made Portmeirion a beautiful village during the period between 1925 and 1975. Gwynedd in North Wales consists of Portmeirion village that houses Italian style architectures and village landmarks. At present, a non-profit trust maintains the village.

The community that resides in this Portmeirion Wales area is known as Penrhyndeudraeth, and they historically get enriched by the beautiful River Dwyryd, which runs by the village. One can reach the village from the Minford Railway Station within minutes. The village has been a most sought after film shooting destination and the famous films, The Prisoner, and The Village are two of them.

Relevant historical records of the village show that its designer Sir Clough Williams-Ellis had denounced numerous requests to build the Portmeirion village alike of Portofino on the Italian Riviera – a fishing village. His intention was to make it a village that its residents and visitors can feel the Mediterranean atmosphere. But eventually, he subsided claiming that he would not resist designing a village as beautiful as Portofino.

Portmeirion has been inspiring creators from many fields such as arts, architecture, designs, films, television dramas, writing and so on for years. Author Noël Coward wrote Blithe Spirit while he was staying at the Portmeirion hotel. Frank Lloyd, a famous architecture, had visited the village in 1956. The famous personalities such as Paul McCartney, Ingrid Bergman, and Gregory Peck, Jools Holland had also been to the village.

Those who visit this private village never forget to have a walk in its beautiful Central Piazza. The design of this location shows today’s designers the beauty of a creative mind that can set nature in its first glory in a man-made environment. In 1926, the Central Piazza was built.

From this place, visitors look forward to having a view from Llechollwyn at the lane that runs to Dwyryd estuary and beyond. The breathtaking view of the surrounding mesmerizes them all with no words to describe what they see. The white buildings of Portmeirion, its waters, Ynys village, and the lane itself complete the view that visitors can carry in their mind forever reminiscing the everlasting beauty of Mother Nature that merges so easily with man-made designs.

Further, architectural marvels of Portmeirion include Bristol Colonnade, Gothic Pavilion, Belvedere Statues, and Hercules Hall to name a few. Everywhere in this grandeur of a village, one can see Italian architectural fascinations. Thousands visit this holiday destination just to witness its architectural beauty.

The Quayside that skirts the Portmeirion hotel is a haven for engaging in fun activities. Kids enjoy the place very much by swimming, playing adventurous games like pirates and various other fun activities. The woodland called ‘The Gwyllt’ sprawls over ten hectares of land attracting visitors to the destination in hundreds. Caton Haigh, an expert on wild fauna and floras, has designed The Gwyllt.

The Castle Deudraeth, recorded as a mansion of a Victorian MP in the past, provides wordless reasons for having a visit to Portmeirion. With impressive stone façade and towering but beautiful architectural marvels, The Castle Deudraeth is indeed a historical phenomenon in Portmerion village. The Village Festival in September, the Ffestiniog Railway journeys, Portmeirion Potteries made by the village founder’s daughter, Susan, are some of the other tourist attractions in Portmeirion.