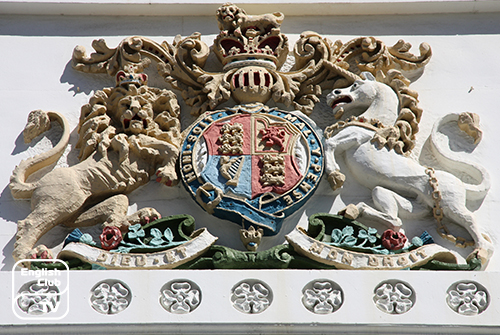 In tracing the history of the Royal Coat of Arms in the United Kingdom, this is passed down through the royal family from Monarch to Monarch. It is only the reigning sovereign, currently Queen Elizabeth II, is the only individual who is permitted to use the actual Royal Coat of Arms, while other Royal Family members are allowed to use variations of the original.

Since the Queen is Head of Justice, the courtrooms also display it with the judges acting as representatives of the Crown. Although coins used in Britain also bear a form of the Royal Coat of Arms, it is only the one pound coin which bears the entire Royal Coat of Arms.

The national symbol of the United Kingdom is also permitted to carry the Royal Coat of Arms. It is, therefore, displayed on several official government documents such as passports, but displayed without the ‘helm’. The ‘Royal Standard’, a banner bearing the Royal Coat of Arms, flies over the royal palaces at the time when the Queen is in residence.

The Evolution of the Royal Coat of Arms

The Royal Coat of Arms bears an extensive history which is nine centuries long. It was King Richard I popularly known as ‘Richard the Lionheart’, who decided to use a shield with three Lions. They represented ‘England, Aquitaine and Normandy’ and were chosen to mark the King’s association with each area, his great, great grandfather being the Duke of Normandy and his mother being Eleanor of Aquitaine. This shield grew into a symbol of the monarch as it was used to identify the King in the battlefield.

In 1340, King Edward III included the French Royal Coat of Arms to that of Britain’s, to mark his claim to the French throne. However, this addition was abandoned in 1801.

When King Henry VIII ascended to the throne in 1534 and declared himself the ‘Supreme Head of the Church of England’, to mark the Church’s association with the British Sovereign, the Royal Coat of Arms appeared in the churches around Britain.

The first significant change to the Royal Coat of Arms occurred in 1688, during the reign of ‘William and Mary’, where King William’s Arms was added to the Royal Arms. Following the 1707 Union, the Scottish Arms was placed beside the English Arms, along with the French fleurs-de-lis and the Irish harp. King George, I made further alterations in 1714, adding to it the symbols of Hanover: three lions; two gold and one blue, and a white horse.

The 1801 Act of Union with Ireland resulted in more changes. The French arms were dropped, but the English, Scottish and Irish Coats of Arms remained. A crown was placed upon the Hanoverian horse in 1816.

The final alteration to the Royal Coat of Arms took place in 1837, during the reign of Queen Victoria. She made changes to the initials of the monarch and abandoned the Hanoverian Arms which she could not acquire as a female Head of State.