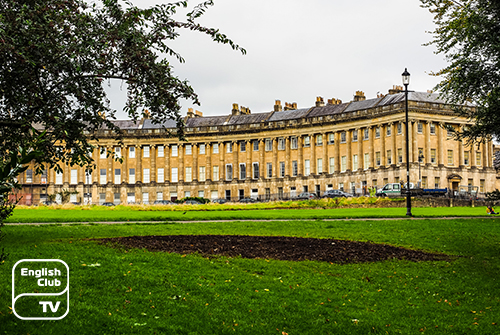 Bath, one of the world’s great cities that showcase the Royal Crescent is one of 812 UNESCO World Heritage Sites and by its listing confirms it is an architectural beauty that is in no doubt amongst the very best. The Palladian styled design crescent is adorned with many classical columns structured along its length.

The Royal Crescent comprised of thirty Grade I houses built between 1767 and 1775 to the design made by John Wood the Younger. Forming a sweeping semi-ellipse of houses seemingly to embrace the imposing Lawn was judged as being one of a truly grand scale and doubtless being among one of the best examples of Georgian architecture seen in the UK.   The Crescent is among the UK’s Top Ten Architectural Icons as voted by a recent poll on Channel Four.

The land was leased by John Wood the Younger in 1766 from Sir Benet Garrard and started on the building of the 30 terraced houses in 1767. The completed houses occupied a crescent spanning 538 feet across and came into occupation by 1778.

The façade features 114 giant order Ionic columns 2′ 6″ in diameter and an imposing height of 22’6” extend to over two of the floors. The overall height of the building is 47 feet and the original roof constructed in stone. The lawn was a cabbage plot during the war right up to 1956 with 72 allotments. Eight of the houses are each taken by one family, today. Two of those are made up as one unit. In 1945 it was planned to convert them into public offices. 600 buses and tourist coaches used the Royal Crescent during the hours of 8 am to 8 pm, and it took over 18 years to have the tourist buses and coaches in addition to the regular traffic of about 9000 tonnes of coach traffic per week banned from using the Royal Crescent.

The Lawn ever since constructed was privately maintained with rights of use by its residents. Presently the maintenance of the Lawn is executed by the Crescent Lawn Company (CLC) formed in 2003 with the sole purpose of the title holding of the Lawn and its boundaries and to manage the upkeep on behalf of the Royal Crescent Society. The Company received Absolute Title granted to them on 8th April 2003. The title of Acquisition by no means affect the rights of the residents in using the Lawn as stipulated in their Freeholds or Leases.

The Royal Crescent Society having long championed the cause of restoration of the Ha-ha and the Lawn’s Railings, caused the CLC to initiate a project in achieving this. Together with Resident contributions, a grant from the Heritage Lottery Fund, and funds from the Royal Crescent Society were able to progress in work by entering into a partnership with Bath & North East Somerset Council (B&NES). The railings restoration work completed in 2011 and the pavement in 2012.

The perfect lawn overlooking the Royal Victoria Park has an impressive ha-ha which is, in fact, a landscape designed to recreate a recessed barrier to preserve unobstructed views and prevent access to livestock grazing.

The Royal Crescent is today, home to a five-star luxury hotel, and at No. 1 houses a museum of Georgian life, additionally it also provides private housing.