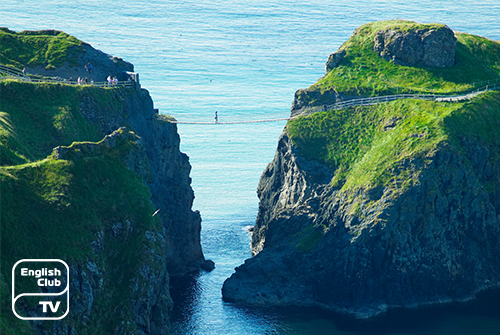 Northern Ireland formed by the union of six counties of ‘Londonderry’, ‘Armagh’, ‘Down’, ‘Fermanagh’, ‘Tyrone’ and ‘Antrim’. Antrim falls within the historic ‘Ulster’ province and is located close to the biggest inland water body in Ireland, ‘Lough Neagh’. It also covers a considerable portion of Northern Ireland’s capital city; ‘Belfast’ and records a population density of 203 individuals per square kilometre.

Antrim, however, is best known for its diversity, and a large number of tourist attractions found within the area. Some of the most visited sites are listed below.

Ireland’s most famous landmark and a ‘UNESCO World Heritage Site’, ‘Giant’s Causeway’ is made up entirely of around 40 000 hexagonal basalt columns. The ‘Department of the Environment for Northern Ireland’ declared it a ‘National Nature Reserve’ in 1987, and it ranked 4th in the 2005 ‘Radio Times’ readers’ poll on the ‘Greatest Natural Wonders in The United Kingdom’.

These rock formations were created about 60 million years ago when this particular area became subjected to high volcanic activity. It resulted in the surfacing of molten basalt, which then cooled to form these spectacular columns.

According to Irish legends, the locals believe it to be a causeway built by the Irish giant ‘Fionn mac Cumhaill’. He had made it across the ‘North Channel’ to answer a challenge to fight by the Scottish giant ‘Benandonner’.

While taking the cliff path, visitors can view these fascinating formations which have given names such as ‘Honeycomb’, ‘the Giant’s Organ’ and ‘ the Wishing Chair’.

Over 61,000 tourists annually visit the swaying rope bridge of ‘Carrick-a-Rede’. The 66 feet long bridge runs from ‘Ballintoy’ to small island called ‘Carrickarede’, 89 feet above the rocky coast below.

North Ireland’s Northernmost point is considered to be ‘Rathlin Island’ which is a ferry ride away from County Antrim. Many myths and legends surround this island, and three massacres noted in its history. Its current population is around 200 people. It is well known for its wildlife, notably the many colonies of seabirds and puffins. Also situated on the island is a bird sanctuary. For those who enjoy scuba diving, this island is an ideal location.

The County Antrim is home to 9 verdant, woody glens. They stretch along the ‘Antrim Coast Road’ with beautiful coastal scenes in sight. The forested areas present many waterfalls, growing ecological habitats and some occasional bog lands. These glens are the perfect choice for adventurous hikers.

This castle is titled the most romantic castle in North Ireland. It is a medieval Irish castle located at the very edge of a high cliff that in 1639, it’s kitchen area fell into the sea below, resulting in the death of almost all the kitchen staff. It was owned by the rulers of ‘North East Ulster’ during the 16th century, the ‘MacDonnell Clan’. The castle now forms a picturesque ruin which attracts many tourists.