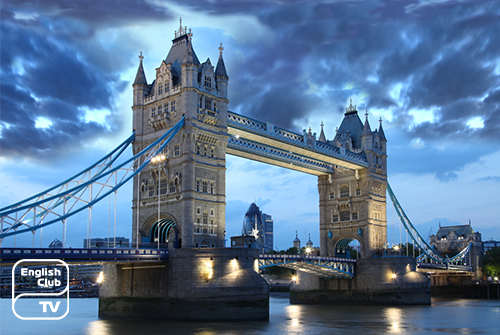 The Imposing Tower Bridge in London

The famous bascule bridge known as the Tower Bridge was built over the River Thames in London between 1886 and 1894 and became one of London’s greatest landmarks. Two overhanging walkways that were combined and tied to two towers constitute the Tower Bridge in London.

The two towers support the suspension components of the bridge. The machinery that activates the bridge’s pivotal parts is housed in each tower. For part of Queen Elizabeth II’s Silver Jubilee celebration, the bridge was painted red white and blue for the first time.

Because of prospering commercial activities in the London East End during the second quarter of the 19th century, that the need for a bridge over the Thames River was felt. Since the construction of a road level permanent bridge would hinder the sailing of ships to the Pool of London, it was proposed by city architect Sir Horace Jones to build a bascule bridge in 1884.

Sir Horace also sat as a judge to review designs submitted by the public in this regard. Engineer, Sir John Wolfe Barry, started to work on the design in 1887 and completed the bridge in 1895 with five main contractors. They were Baron Armstrong, Sir John Jackson, William Webster, Sir William Arrol & Company, and Sir H.H. Bartlett. About 432 workers participated in constructing the bridge while E.W. Crutwell being the resident engineer of the site, looked after the work.

By the use of over 70,000 tonnes of concrete in the riverbed, it achieved the strength of the structure. The walkways and towers comprised over 11,000 tonnes of steel. Portland stones and Cornish Granite were used to clad the structure thus protecting the steelwork as well as providing a great look for the bridge.

George D. Stevenson took over the construction when Horace died in 1886. He replaced the brick façade of the bridge with a Victorian Gothic style structure. Due to this new replacement, the unique look of the Tower of London and the new bridge was no more visible. The entire construction cost over £1,184,000.

The Prince of Wales and his wife, Alexandra of Denmark, declared open the bridge on June 30, 1894. Tower subway which opened in 1870 was eventually closed in 1898. In 1910, the open air walkways were closed because of many complaints that prostitutes and pick-pockets were using them for carrying out their illegal activities. In 1942, while World War II raged, another engine was fixed by Vickers Armstrong Limited besides the two existing engines. The new engine was given to Forncett Industrial Steam Museum when the modernization of the system was complete in 1974.

A new electro-hydraulic system designed by BHA Cromwell House replaced the old operating system in 1974. This famous iconic structure is now one of the famous must-see attractions London has to offer, made possible by the establishment of the Tower Bridge Exhibition in 1982. In 2000, a computer system was fixed to manage the system of raising and lowering the bascules with a remote system. Due to a malfunction of the computer system, new sensors were attached to it in 2005.

The bridge got a facelift in 2008. It cost £4 million and four years to complete. The new system was installed to prevent river water pollution. The walkway interior renovation was completed in 2009. A new lighting system was also installed by designer Eleni Shiarlis to be used for exhibitions and similar events.