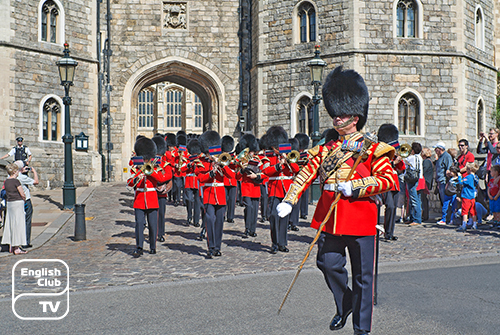 Iconic figures in British history and culture, the members of the Queen’s Guard are fully trained soldiers, assigned with the task of guarding the Sovereign residences in Great Britain, namely, the Buckingham Palace and St James’s Palace. They were in operation so far back as 1660, under the reign of King Charles II, then known as the ‘King’s Guard’. To date, the Royal Guardsmen have served four Queens and 10 Kings of the British Monarchy.

The Famous Uniform of the Royal Guardsmen

Unlike regular military officials, the Royal Guardsmen are uniquely dressed.
Their uniform consists of a prominent black bearskin cap. A red stripe runs down the seams of their dark blue trousers, held together with a white leather belt.
A scarlet red tunic with white strips, coupled with a dark blue collar, and blue and white cuffs, make up their upper garment. Gold buttons bearing the Queen’s insignia adorn the front.
They typically carry unloaded artillery but on occasion where there may be a threat to the throne if provided with ammunition.

The Royal Guardsmen belong to 5 regiments.

Although all five of these groups of foot guards seem to wear the same uniform, there are minor differences visible upon close inspection. For instance, the shape of the badges, the colour of the plume and the arrangement of spaces between the buttons of the tunic are uniquely different for each regiment.

The Changing of Guards

The Changing of Guards is a colourful and traditional ceremony. During this ceremony, ‘Old Guards’ hand over their duties to ‘New Guards’. A process called ‘Guards Mounting’ is a Guard’s band that escorts the Royal Guardsmen to their posts.

A guard usually stands on duty for two hours. He then marches fifteen paces around his area of responsibility, about four to five times, every ten minutes. They are ordered not to “eat, sleep, smoke, stand easy, sit or lie down” during the two hour period. If any individual blocks the path of the royal guardsman as he is marching, he will then shout: “Make way for the Queen’s Guard!”
The Royal Guardsmen are not allowed to interact with the public, even with facial expressions. Their stoic behaviour and elegant attire have made them something of a tourist attraction and some are seen trying to make them laugh or snapping photographs with them.
It is essential, however, to bear in mind that they are fully operational members of the British military. When dealing with troublesome tourists or the general public, especially in the case of a threat, they are instructed to come to attention sharply and then shout, “Stand back from the Queen’s Guard”. He may repeat this process one more time. If the target does not retreat, the guardsman may direct his rifle at the interfering party, thereby assuming the ‘port arms’ stance. If none of these warnings are heeded, the royal guard can call for assistance or detain the relevant person.