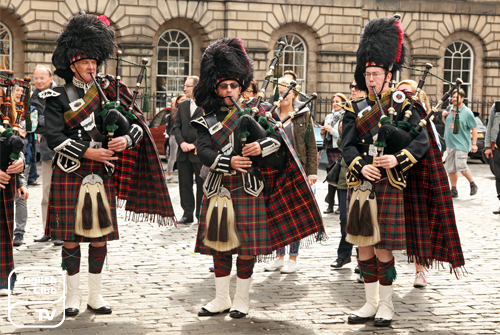 If you’ve ever visited the Scottish Highlands, you would have enjoyed listening to Scottish music. The Highlands is one place to discover the best folk music of Scotland. Traditional Scottish music sees instruments such as bagpipes, border pipes and small pipes, piano accordion, cello and the grand piano. However, each region seems to bring some difference to Scottish music in general. The Orkney and Shetland Isles sing English songs and play the fiddle quite frequently. There is a strong influence of Norwegian music while the Hebrides and Highlands sing mostly in Gaelic with bagpipes playing in the background.

The Border Regions and Lowlands tend to enjoy an English style. However, the music in Cape Breton and Nova Scotia sing in Gaelic accompanied by the fiddle and bagpipes with a dance-like quality as the background music. Scottish folk music is unique to Scotland with folk singers incorporating Celtic music into their own. The diverse traditional music of Scotland has a rich history; it has a distinctive sound and offers a twist that of a blending bagpipe that seems akin to rock music.

Visitors can attend traditional Scotland music festivals like the Royal National MOD and Blas Festival. These music festivals bring together emerging and established artists from across the country. Celtic Connections held in Glasgow every January celebrates the beauty and diversity of Scottish music showcasing contemporary folk bands, and local and international musicians. Some of the modern folk bands popular in Glasgow include the likes Salsa Celtica, Peatbog Faeries, Shooglenifty and Capercaillie.

Bagpipes in Scotland have been famous for centuries. Bagpipes originally formed in the British Army during the 18th century. The use of the rousing sound of the bagpipes was first as an inspiration to the Army. The sound of pipes accompanying modern day musicians is very much influenced by the history of bagpipes. However, there are players that connect to the non-military aspect of bagpipes.

The fiddle has Scottish ancestors like the viols. The 17th century saw the modern violin arrive from mainland Europe. Traditional music calls it the fiddle; however, it is the same musical instrument that is played by classical violinists. Today the fiddle continues to be one of the most traditional Scottish musical instruments with the fiddle festival, fiddle bands, Reel societies and Strathspey.

The Clarsach is the oldest musical instrument in Scotland. The instrument played a significant role in society being but gave way to more familiar instruments like the fiddle and bagpipes when the social structure changed in the country. By the 18th century, with the introduction of bagpipes the need to use the Clarsach had died out completely.