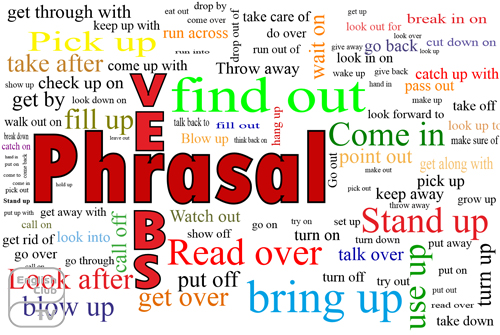 In English Grammar, the ‘Verb’ constitutes of Phrasal Verbs. Phrasal Verbs make speaking and writing English a pleasure. They also highlight the meaning of the verbal or written action of a sentence more distinctive. The phrasal verb comprises of two or three parts, mainly the verb and a preposition, or verb with an adverb. One can separate these two elements and use them in sentences. But, the meaning of a sentence will vastly change when it includes a phrasal verb. English learners should be very careful when they use common phrasal verbs as they may express the wrong meaning entirely by using incorrect phrasal verbs.

The English Language contains hundreds of phrasal verbs. One verb may take on a different meaning when used with other adverbs or prepositions. For example, ‘Look at’ and ‘look into’ and ‘look after’ denotes different meanings from each other. When someone ‘looks at’ something, he or she examines the subject more carefully and widely. On the other hand, when someone ‘looks after’ something, he or she will protect the subject from harm. He or she protects and supplies the objects with at least the most essentials they need.

In this context, English learners, especially foreign learners, must not ‘look down on’ each phrasal verb that comes along in the process of their learning. However, it is in the opinion of English professionals that beginners of English learning may understand Phrasal Verbs as they use the language. Therefore, they say to have them indulge in the practical use of the language rather than lectures on Phrasal Verbs. It may be true with the more common phrasal verbs. So what are the most commonly used English Phrasal Verbs? ‘Looking at’ them will undoubtedly provide for English learners their forms and their usage.